Warning: Do not use this method with OneDrive (consumer) in Windows 10

After moving a client to Office 365, he started moving files into OneDrive. He tried to add some super large files that were too large to sync, which created sync errors that annoyed him. While you can disable error reporting in the Office Document Upload Center and resolve errors in the OneDrive apps, if you can’t fix the problems using those methods, you can clear the OneDrive caches and re-sync.

Unless otherwise stated, “OneDrive” refers to either/or OneDrive consumer or OneDrive for Business.

Before you do anything, make sure you have a local backup of the OneDrive files. If the files aren’t synced up, they will be lost when you clear the cache. You can back them up by moving the files to a new folder… because you will need to empty the OneDrive folder and allow it to resync after clearing the cache.

The cache is stored in folders under the local app data path, at C:\Users\Diane\AppData\Local\Microsoft\Office\. (The shortcut is %localappdata%\microsoft\office. Type or paste it into the address bar of Windows Explorer and press Enter to open the folder.)

You’ll need to delete the Spw (used by OneDrive for Business) and the OfficeFileCache folders (Office Document Upload) under your Office version number (This is the folder path in Office 2013's: C:\Users\username\AppData\Local\Microsoft\Office\15.0\OfficeFileCache)

Close all Office applications, including OneNote and the OneNote Tool. Open Task Manager (you can open Task Manager by pressing Ctrl+Shift+Esc or right-click on the Task bar and choose Task Manager). Check the processes for the following applications. If any are still running, End them one-by-one. (Select the tasks process then click the End task button.)

Tip: in Windows 8 and above, if you don’t see a large list of processes and tabs, click More Details at the bottom of the dialog. Right-click on the Name header (on the Processes tab). Choose Process Name, then sort by that column. 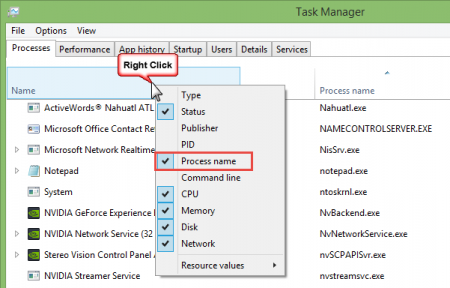 Verify the OneDrive folder is empty.

If your account has Windows Administrator permissions, you can delete the contents of the Spw and OfficeFileCache Folder from Windows Explorer. If not, you’ll need to use the Command Prompt.

On the Start screen (or in Start search in Windows 7) type cmd. When Command Prompt or cmd.exe appears in the results, right-click on it and choose Run as Administrator.

Using the command prompt, delete the Office 2013 file cache and Spw and OfficeFileCache folders by issuing the following commands. (Change the version number to match your version.) 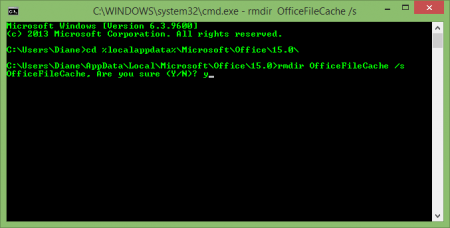 Type cd %localappdata%\Microsoft\Office\15.0\ and then press the Enter key.

Type rmdir OfficeFileCache /s and then press the Enter key.

Type cd %localappdata% \Microsoft\Office\ and then press the Enter key.

Type rmdir Spw /s and then press the Enter key.

Note: if you get an error when executing either rmdir command, one of the .exe processes is probably still running. Go back to the Task Manager and stop the process then retry.

How is it that it's so hard to make something so simply work which DropBox has done since day 1? What is it? Lack of programmers? Bad architecture?

My bet is that is is a little of both.

I had problems not being able to delete 2 Access DB files, ContentTable.Accdb and .Laccdb, I tried stopping many programs in Task Manager, but couldn't find what had them open.
Finally I logged out and in as Administrator on my Windows 7, as that doesn't start anything (except basics), and was able to delete them.
Then all worked fine.
Thanks for this, as the Repaid in One Drive obviously has shortcomings and should be able to do what you have written up herer.

and where i can find a solution in win10 envroiment?

The same here. I have tried many options but this is the one that has worked.

Thank you so much for excellent easy to follow steps.I can finally sync my files again