I hated Windows 8 when I first installed it. Navigating was difficult since I'm using on a desktop computer and live on the desktop. The Metro screen might be OK for touch screen tablets, but it's not workable for my desktop.

Yes, I know, you can quickly get to the start screen by holding down the Windows key and access many applications quickly by pressing Windows key + R to get the Run command then type their name, but damn it, I don't want to keep jumping back to the screen or typing app names to do things. (OK. I type app names in Windows 7's Start search field, but the apps come up quickly, unlike the Run command where I need to know the name and or the path.) Yes, there is a keyboard shortcut for the Windows 8 search screen, but I don't know it and I don't want to drop back to that interface. I want to search on my desktop.

Pinning apps on the Taskbar only goes so far before it's full… although it would be great if i could pin apps to the taskbar on my second monitor – it's 22″ widescreen in portrait mode, so the taskbar is very long. (It's really great that it has a taskbar! Thanks Microsoft!)

Most (if not all) of the Start menu shortcuts should be here –
C:\ProgramData\Microsoft\Windows\Start Menu\Programs

This folder also holds shortcuts, in most cases, duplicates of the shortcuts on the ProgramData list. Applications installed for 'this user only' may be placed in this folder.
C:\Users\username\AppData\Roaming\Microsoft\Windows\Start Menu

While you can pin these folders to the Taskbar, turning the ProgramData folder into a Taskbar Toolbar or adding it to True Launch Bar will make access to your programs much easier.

I've been using Taskbar toolbars for years, ever since Windows introduced them and I always hide desktop icons – why cover a pretty wallpaper with icons? – and add the Desktop folder to the taskbar. (I find that a vertical taskbar works well on widescreen monitors and the taskbar toolbars work "better".) 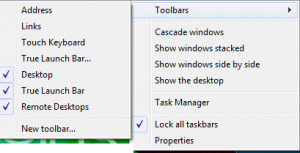 To create a toolbar, right-click on the Taskbar and expand Toolbars, then select one of the predefined toolbars or choose new Toolbar and select a folder to display on the taskbar as a menu. 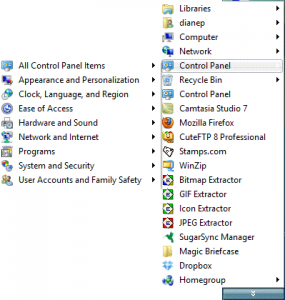 To use the toolbar, click on the chevrons to expand the menu and select a shortcut or file.

As nice as toolbars are, they didn't do quite enough for me. Plus more than one or two toolbars is all I have room for because they take up valuable space on the taskbar that could be used for programs, and (AFAIK) I can't move them to the second monitor's taskbar.

Years ago, back when Office stopped including the Office  toolbar, my friend Jessie-Louise introduced me to True Launch Bar and I've used it ever since. It might be the best $19.90 I've ever spent. It has a million features but I tend to use it for just one purpose – to create menus for folders (same as Taskbar toolbars). I prefer it to taskbar toolbars because the menus are more compact than toolbars.

I didn't install it in Windows 8 at first, because I wasn't sure if it would cause problems and I wanted a usable computer. Today I decided I had suffered enough and installed it.

I'm in heaven. I think I can live comfortably without the Start menu (although I will miss the Start Search field.) A Run command is one click away. I can add folder menus, links to open folders in Explorer, links to programs… and it uses only as much space as I want it to.  I like small and compact, so I have it set to a minimum of 1 icon visible. On the vertical taskbar, this setting shows 1 row of 3 icons and the expansion chevron. 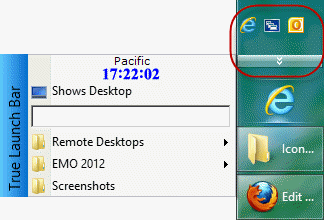 To create a Start menu toolbar menu in True Launch Bar, right click on the launch bar and choose New, then select Menu. Expand the Predefined menu and select Programs. You can customize the menu format, or just click Finish. Repeat these steps to create menus for My Documents or other frequently used folders, or browse to select a folder to create menus to the folders you use the most. 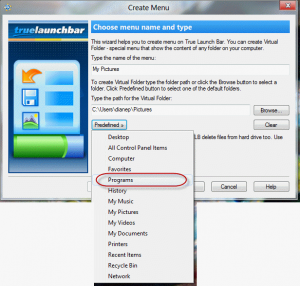