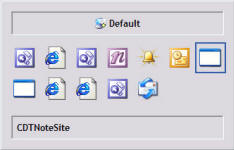 When you press Alt+Tab you may see one or more generic windows titled "CDTNoteSite" and are unable to bring these windows into focus. Selecting one appears to do noting. If you look in Task Manager, you don't see a file running by this or a similar name.

Is it spyware? A virus? A trojan? Something to be worried about?

Nah… it's just the 3M Post It Note program and it means you have some notes (either opened or minimized to a little button, see samples below) on your desktop. These ghost windows are not normally visible when you do an Alt+Tab but apparently a recent update by either Microsoft or 3M changed the behavior.

I have Post-it® Software Notes Version 3.0.2.2069 running on Windows XP Pro for Tablet PC and noticed these ghost windows in the late summer of 2005. Others have seen similar ghosts at various times (and locations) since Post It Notes software was released, so a future update will likely fix it, until a later update.

A minimized and open Post It Note – each one puts one generic window in the dialog when you press Alt+Tab: 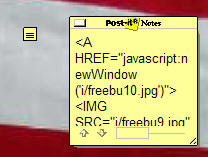